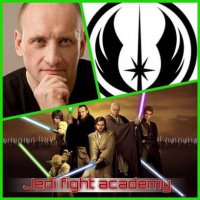 Andrew Lawden is an actor who performed as a stand-in for Liam Neeson's character Jedi Master Qui-Gon Jinn in "Star Wars: Episode I The Phantom Menace" He also played a Naboo Royal Guard as well.

Andrew is an experienced actor with over 20 years of work in high profile, Theatre, Film, T.V and adverts.
In addition to "Star Wars" Andrew's credits include "Robin Hood" , "Firepower", "Murphy's law" , "Topboy 2", the London stage version of "Back to the Future" (Doc Brown and Strickland.) and currently ,the new ITV drama , " Prime Suspect 1973," by award - winning writer, Lynda la Plante .

Suitable for all ages and included in your ticket price! 4 sessions first come first served!

Using a lot of the moves learnt from the film, Andrew teaches everyone a small routine and gives the the option of owning their own, personally signed replica light sabre with a certificate if they wish to have one.